Recent movies you saw - recommend or no | Page 155 | GTAMotorcycle.com
Menu
Log in
Register

Recent movies you saw - recommend or no

Site Supporter
Yeah...dottor and I went and were blown away ...I'm not a fan of Joaquin Phoenix but damn he takes on tough roles and knocks it out of the park. The dance down the stairs is going to be iconic in cinema for decades.

He messes around in interviews a lot, and no exception with Jimmy Kimmel.

MacDoc said:
Yeah...dottor and I went and were blown away ...I'm not a fan of Joaquin Phoenix but damn he takes on tough roles and knocks it out of the park. The dance down the stairs is going to be iconic in cinema for decades.
Click to expand...

Now try going down the rabbit hole of trying to figure out what was real and what was just in his head. Writer/director Todd Phillips deserves a ton of credit too.
http://www.morallyambiguous.net/

"Only in concealing one's identity, can one truly be known. (Whatcha!)" - Brother Silence, "The Gamers: Dorkness Rising"

kwtoxman said:
Here's an eclectic one and a blast from the past, The Commitments. 88% on RT and a music move; it's about a Dublin Band coming together to play Southern US classic soul music. It was a triple-plantinum selling soundtrack too. Highly recommended if you are a music fan. 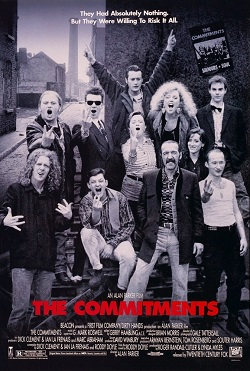 Sent from my SM-A530W using Tapatalk
I've got to stop saying "how stupid can you be?", too many people take it as a challenge!

Now try going down the rabbit hole of trying to figure out what was real and what was just in his head.
Click to expand...

part of the craft that you really don't know...well executed and acted movie.

Might have posted it earlier but Ford Vs Ferrari was terrific in iMax. Love true stories well told and acted and this one scores on all counts. Christian Bale has been incredible since he was 12 in Empire of the Sun, another movie based on actual event. While Cheney was an eye opener and not entirely "entertaining" ...Bale was superb....and unrecognizable.

Site Supporter
Knives Out - Amazing cast and entertaining if you can get past Daniel Craig's over the top southern accent.

“Instant information is instantly obsolete. Only the most banal ideas can successfully cross great distances at the speed of light. And anything that travels very far very fast is scarcely worth transporting, especially the tourist.” - Ted Simon, Jupiter's Travels
J

regder said:
Knives Out - Amazing cast and entertaining if you can get past Daniel Craig's over the top southern accent.

Going back to the 80's, watched Fletch and Fletch Lives. Never was a fan of Chevy Chase as I only really knew him from Caddyshack and the National Lampoon's series which aren't for me. The two Fletch movies are amazing though. Smart, witty, well written. Great watch
Click to expand...

Did an 80s binge today too. Four weddings and a funeral and The wedding singer. Bit of a theme.

The Night Before. Fun and funny.

Site Supporter
The Two Popes will be an Oscar run. Netflix poke in the eye to Hollywood and incredible performances,

I enjoyed it....if you can handle the first 30 minutes which are literally all over the place! The rest is fun.

Site Supporter
Going tomorrow with dottor to iMax has to be better than Ad Astra which was a monumental waste of time.

Site Supporter
We saw Rise of Skywalker in iMax 3d ....enjoyable mess just about nails it...very Disneyish ending ...was reminded of the last bit of Wizard of Oz.....
I do think it closes off an era allowing a reboot.
The physics were excruciating even for Star Wars....hand gun battle with no helmets on an open deck with space ships zooming in the background...wince.
Few too many tropes from previous efforts plus I swear there were some Dune references..wonder if that's hint of things to come.
Rae carries it. I really had no use for Adam Diver ...not sure what the Hollywood fascination is with mister pimples.

But yah..closes off a cycle as I saw the original in theatre ....this one has flashes of the humour from that gem but feels dated.

Marvel is so much more satisying as is The Expanse

Saw the Rise of Floorwalker. Predictable plot. Return of the Jedi all over. Generic Disney stuff for kids under 14. Glad I didn't spend money on it. Amazed I stayed awake through it.

Site Supporter
It was very questy: first we have to get the doodad. Next we need to find this other item. And then we need to complete this task. And then... And then...

Intersperse flying-through-space scenes between quests. Also, that last movie? Forget it ever happened. We're going to retcon every single plot-point from the prequel. Should have been called "Rise of J. J. Abrams, Fall of Rian Johnson".

Site Supporter
I figure Disney channel is worth another month for the entire Marvel cycle and all of the Star Wars in 4k and HDR.