In case you were wondering about those big scoots..... | Page 14 | GTAMotorcycle.com
Menu
Log in
Register
Install the app
You are using an out of date browser. It may not display this or other websites correctly.
You should upgrade or use an alternative browser.

In case you were wondering about those big scoots.....

Site Supporter
I forgot to ask him where/who made

Well, I bought a 2009 Yamaha T Rex in December and rode it to Florida! Crazy *** idea; I left on December 5th when it was 14C but quickly encopuntered that pesky polar vortex that brought snow to Texas. I was always right on the edge of the storm and had to ride through 4 days of rain and temps of 2-3C. I did not see a bike on the road until I was somewhere around Columbia, South Carolina. It only got warm when I was near Savanah, Georgia.

Anyways, the stock windshield is not great and the Givi Airflow might be going on it this summer. Fuel range is not that great either; i was only getting around 230 kms to a tank. But, overall, I'm happy with it. I've only had it up to 160 kms/h and the tach was around 6,500 rpm. Double front disk brakes. It needs new rubber now and i think from the Yamaha forum that the desired choice is the Pirellis. I'll be going to Deal's gap in a month for a showdown between the T Rex and the Dragon!
2011 KaTy Mary 990 SMR
F

230 km range seems to be the number for the big scoots--the Burg is similar. The gas tank location restricts size somewhat. Shame we don't get the updated Tmax here. It's supposed to be pretty good by any standard.
If getting the bike ready and getting around with it means you'd rather take the car? You have the wrong bike.

I suspect that strange looking Honda will get better mileage but then it's tank is ridiculously small.

I suspect all the big scoots will move to the high streamline style to improve gas mileage.
On my demo ride list. "I never set out to be weird. It was always other people who called me weird." FZ

Site Supporter
That's the 1300 - not sure how it will fly and don't think it's a DCT. I prefer inermediates tho I've made friends with the ST1100 here lately.

and still a brilliant ride and what a motor.

MacDoc said:
That's the 1300 - not sure how it will fly and don't think it's a DCT. I prefer inermediates tho I've made friends with the ST1100 here lately.

and still a brilliant ride and what a motor.
Click to expand...

It was more a comment on the styling Honda is moving towards. I hear you on the st though, looks like that will be this year's acquisition for me, hoping to pick up an 05 in the next couple of weeks, need a two up and not ready ($$$) for a wing yet....
"I never set out to be weird. It was always other people who called me weird." FZ

ST1100 is the better machine I'm told by riders who have had both....cheaper too.

You can ride the ST1100 as a sport tourer - especially nice with the panniers off which takes the weight down.

and with two screens you sort of have two different machines.
It's only about 40 lb heavier than the Burgman if you take the panniers off and significant more on the top end ( which I have yet to explore above 150 )
Last edited: Apr 25, 2014 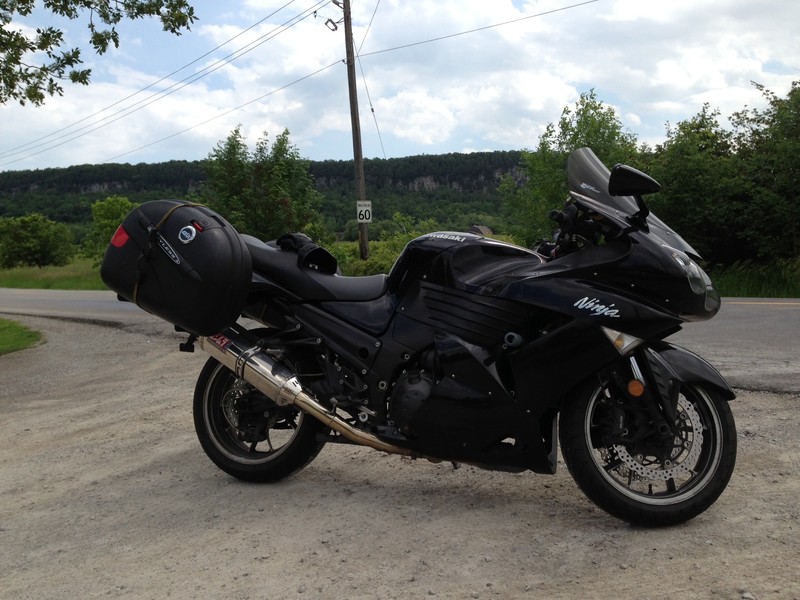 "I never set out to be weird. It was always other people who called me weird." FZ

Flywheel said:
230 km range seems to be the number for the big scoots--the Burg is similar. The gas tank location restricts size somewhat. Shame we don't get the updated Tmax here. It's supposed to be pretty good by any standard.
Click to expand...

We do get it, it is in the Yamaha website. Very low volume model... They probably sell half a dozen per year... what are you paying this year and with who

similar rates, slightly lower, at td/mm for klr and xrl (both 650's) no collision though, the 14, well that's sf and full coverage, again no collision, 150/month....just under 3 grand a year for all three, makes me feel 16 yrs old again.....besides like i tell my wife, the more I ride, the cheaper it gets....per ride....as for the st, I will burn that bridge when I cross it....ya intact wanted something ridiculous, after 20 something years...greedy fcukers, why should I pay for their acquired growth rate...so off to TD/MM, unfortunately they wanted nothing to do with the big ninja...after riding it, I can kinda see why....

all wll tremble as we stroll into the bar....that would be dairy bar of course

Default 650 reliability - High Speed Cruising over long distances
I was able to take off a few days and the choice was either my Goldwing F6B or my Burgman K-9 Exec.

600mi round trip is short so I decide to take my K-9 Exec. The first leg of 300mi from LA to LV was relaxing -stuck in some traffic, windy going up I-15 in some places, but averaging 70-75mph. Just as I expected, a nice relaxing trip for a K-9 Exec, a mid-size tourer.

Coming back to LA was a completely different story . Cages traveling at 80-85+mph and truck going 35-55+mph up the first stretch to the 4000(feet above sea level). The Burgman was flawless as I did want to get stuck where trucks are backed up and trying to pass the heavier loaded 18 wheelers competing with other 18 wheelers.

I filled for gas at Baker, less than 100mi from L.A. and now the cars are going an average 90+mph and trucks 75-85mph. I'm trying to stay within the 70mph speed limit for a nice relaxing ride back, but those trucks are still doing high speed passes so staying out of the trucker's lane.

I know about the 10% speedometer error... so just trying to keep up with the cars, I'm going at an indicated 95-105+mph. This does not slow up until I get to Highway 215 toward Pasadena. So roughly cruising at 85-105mph for 200miles of this 300mile trip from LV to LA. I kept my Burgman in manual OverDrive the entire 200miles except for gas stops every 100mi. I had no problems keeping up with a Harley(no windshield) cruising at 100+mph.

Most of the time I use my B650 for commuting on city streets and freeway. I've toured before on my B650, but this is the first time I experienced such high speeds from cars and trucks. Even when I slowed down for the inspection station coming back a car was 'honking' his horn. I wasn't sure why he was doing this.. fact being there was no one in the inspection station where cars/trucks/motorcycles are flagged for inspection or waved on to continue riding.

Having owned 2 Hayabusa in the past... 150+mph feels like you're going 35mph as you pass cars and trucks like there going 50mph . I'm leaving my Goldwing F6B out of the picture to focus on my Burgman as this was what I was riding.

trouble is it sucks gas with all the frontage. But the heat gauge never moves even sustained 140-150 indicated.

My little 1200 mile ride through the SouthThree friends and I decided to attend the BMW-RA motorcycle rally at Barber Motorsports Park In Leeds, Alabama near Birmingham.
We are all current or former (me) owners of BMWS and all members of the RA. Two of us rode Burgman 650s and the others rode late model BMWS.

The ride from Southwestern Virginia to Birmingham is only 410 miles if you take the boring interstates. However, we went in a little different direction and got there through the backroads, hills and mountains of Virginia, Tennessee, North Carolina, Georgia and Alabama. We spent two days riding through our wonderful country to get there and two days riding back. We spent a day in the largest motorcycle and Lotus car museum in the world at the Barber Vintage Motorsport Museum (http://barbermuseum.org/). We rode about 300 miles per day through a couple of dozen or two of rain showers and temperatures between 88 and 57 degrees.

The Burgmans proved to be the superior ride through the rain an cold. I didn't get wet unless I stopped to let the BMW riders put on their rain gear and I didn't get nearly as cold as they did.

They handled the curves and speed as well as the BMWs. We rode through the Tail of the Dragon and the Cheroheyla Skyway but we rode on many roads far better than either with far more interesting views.

The interstate highway system allows us to cross the entire country and never really see it. Our 1,200 ride shows that you can see our amazing country that is hidden from the folks who are in a hurry to get from place to place. I averaged 51.5 MPG for the entire trip and our moving average speed was 45.6 MPH (I said there were curves).
Click to expand...

Good bike. I did 1600 km in 36 hours on a mix of back roads, twisties and slab to chase spring into southern PA and was not tired when I got home.

Our riding group started out with BMWs and Harleys. We ride on very crooked mountain roads. A couple of years ago, one of the BMW riders bought a Burgman 650 to ride locally. After he rode it a while, he started riding it on our weekly ride of 150-300 miles.

He said it was a fast on the crooked roads as his BMW. He tried to get us to try his from spring until I finally rode it in October. I rode it on a Wednesday and bought a 400 on Thursday. I generally lead the rides and I was told that I rode the 400 faster than I rode my BMW. The 400 was totaled when it was hit in the rear and I replaced it with a 650.
Last fall, one of the Harley riders decided he wanted to keep up and bought a 650. This spring, another BMW rider had his bike catch on fire and he replaced it with a 650 (I found them all on Craigs List). We are all happy with the Burgmans. Four of us went to a BMW Rally three weeks ago and one of the BMW riders rode his 650 as did I. We stayed dryer in the rain and were less tired than the BMWs riders at the end of the day.

On our last day ride, the rider who has both a BMW and a 650 was following me through the mountains on his BMW and commented that he needed to ride his 650 so he could keep up with me.

Site Supporter
Even given the 10% speedo error he's over 100 mph at some points in quite slow traffic. That is really pushing the Burgman.

Interesting when he's braking hard it picked up the tires howling - have to be on them hard to get that sound.... I have heard a few times in PA

But the filtering at speed is nuts....the Burgman is pretty wide and he kept his mirrors extended.

He's paddle shifting at a few points as well to force it into lowest rpm for speed. ( indicated 6th but it's only a nominal range with the CVT )